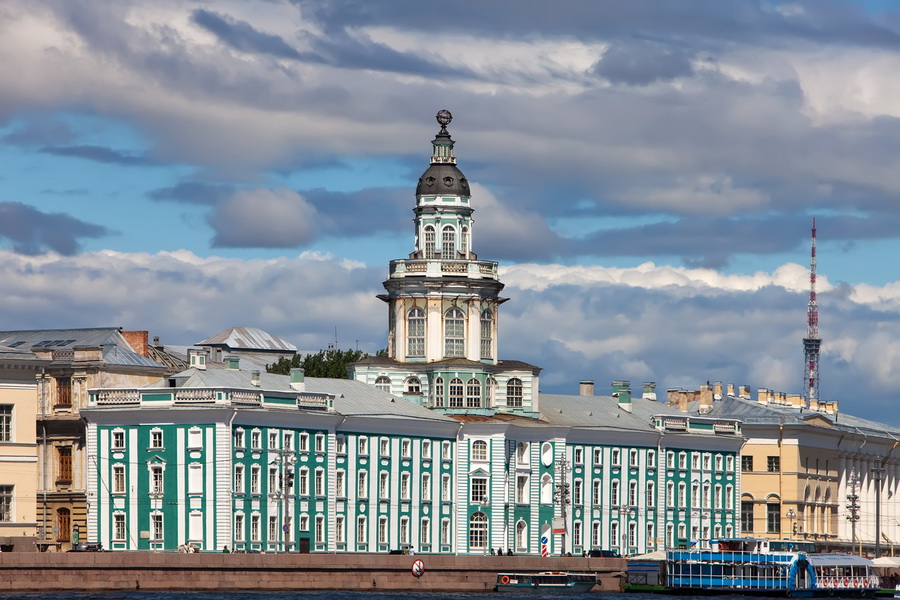 The strange for the Russian ear word «Kunstkamera» that in German means «a room of rarities», was used by Peter I, the founder of St. Petersburg, to name his collection of rarities. Peter’s idea to open such a «room» at home was brought in Europe, where he had found not only the abundance of such displays but also discovered for himself a new science - anatomy. At he same time Peter bought everything that surprised him: books, tools, abnormalities samples etc. On the basis of the all the stuff brought Peter founded his own personal collection of rarities. To replenish it he used the materials brought after domestic expeditions, foreign purchases, and donations from private individuals. Famous travelers from all over the world gave Peter curious things, which they brought from different countries they visited. Updating collections required more space, so in 1714 the personal collection of Peter I as well as the rarities collection belonging to Health Ministry were moved from Moscow to St. Petersburg and placed in the Summer Palace. In 1719 the collection of «Kunstkamera» was transported to «Kikin’s Home» near Smolny courtyard. From that time on Kunstkamera went public; by the order of Peter I it was open to everyone.

Such grandiose collection of rarities from around the world deserved to have its own building, so in 1718 the building for unusual items, superbly preserved to this day, was built on Vasylyevsky Island Spit. The contemporary building of «Kunstkamera» was laid in 1718. It became the model of the so-called «Peter's Baroque» architecture. The building consists of two parts adorned with frontals connected by a multi-tier tower. The eastern part is a library, the western hosts the collections. The tower and the central space were used as the first observatory and anatomical theater. The decoration of the facade is represented by round shallow recesses under the windows, two-color walls, and stucco decoration of the vaults; for the interiors allegorical sculptural groups, busts and medallions of scientists were used.

Today «Kunstkamera» hosts the Museum of Anthropology and Ethnography of the Russian Academy of Sciences named after Peter the Great. It is one of the most complete and interesting in the world. The museum is the repository of a large number of ancient artifacts, but the most popular of his collection are anatomical anomalies.

For over a hundred years the exhibits of “Kunstkamera” served researchers in the field of archeology, anatomy and medicine. By special decree of Peter I all the identified evidence of anatomical deformities were supposed to be taken to “Kunstkamera”. One of the most famous exhibits of the museum is a unique Gottorf Globe-Planetarium made in the 17th century in Germany. It was presented to Peter I during the Northern War. The diameter of the globe is 3.1 meters. On its outer surface all countries, seas and rivers known at that time were shown, and inside the globe was the world's first planetarium. The three upper floors of “Kunstkamera” are occupied by Mikhail Lomonosov Museum where the personal belongings of the scientist, various scientific tools, maps, astronomical devices, and mosaics are kept. The great Russian scientist had spent almost a quarter of a century in the building.

On the basis of «Kunstkamera» collection seven museums were founded: the Botanical, Zoological, Asian, Egyptian, Mineralogical, and Ethnographic. Zoological Museum is one of the largest museums in the world. The current museum collection has more than 30 thousand items, and millions more are kept in stock. The Ethnographic Museum has more than one million artifacts and reflects the diversity of cultures and nations of the Old and New Worlds.