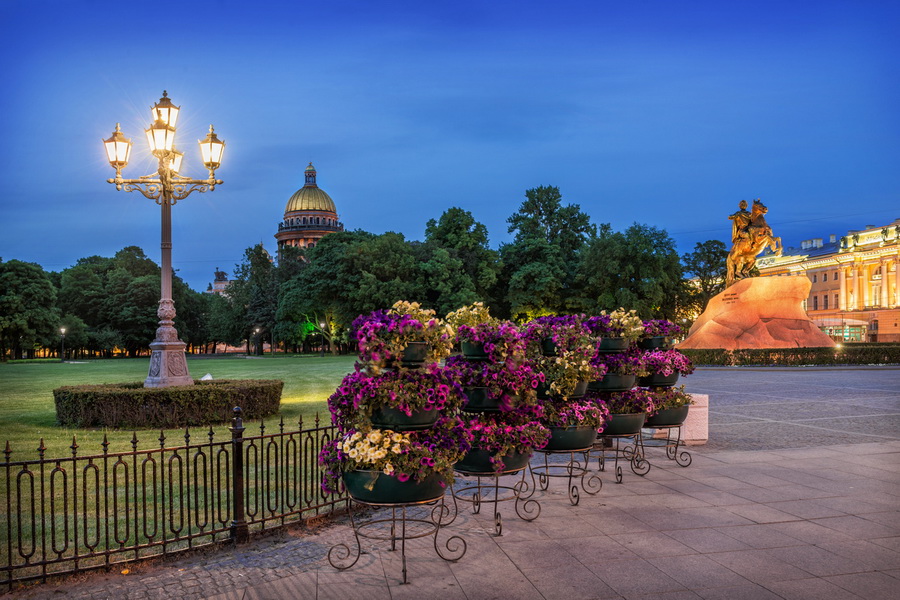 Equally famous to the beautiful Palace Square of St. Petersburg is the Senate Square. The square was named so after the building of the Senate, which in 1763 was built on its western side. The square is surrounded by amazing architectural masterpieces such as the Cavalry Manege built in 1804-1807 created by the outstanding architect Giacomo Quarenghi in the style of Russian classicism. The majestic 8-column portico with a large granite staircase decorates its main façade, facing St. Isaac’s Cathedral. The sculptural bas-relief shows the scene of awarding prizes to equestrian competition winners. In 1816, the diminished replicas of antique marble sculptures of Castor and Pollux were put on the both sides of the main facade.

Now (since 1973) the Manege hosts the Central Exhibition Hall with a total area of 465 square meters. There the major exhibitions, musical shows and presentations are held. On the eastern side of the square is the famous Admiralty.

St. Isaac's Cathedral, perfectly visible from the square, plays an important role in the appearance of the Senate Square. The Senate Square is open to the Neva; from the Peter pier, decorated with polished porphyry vases, is the perfect view of the Vasilyevsky Island Spit and the University Embankment.

In 1834 in the square received new buildings of the Senate and the Synod. The architect conceived the buildings as a complex; they are separated by an arch over Galernaya street. The facades of the buildings are decorated with modeling and decorative sculptures. Now they are occupied by the Central Historical Archive.

The jewel of the Senate Square is the solemn monument to Peter I, aka «The Bronze Horseman» - the symbol of imperial St. Petersburg.