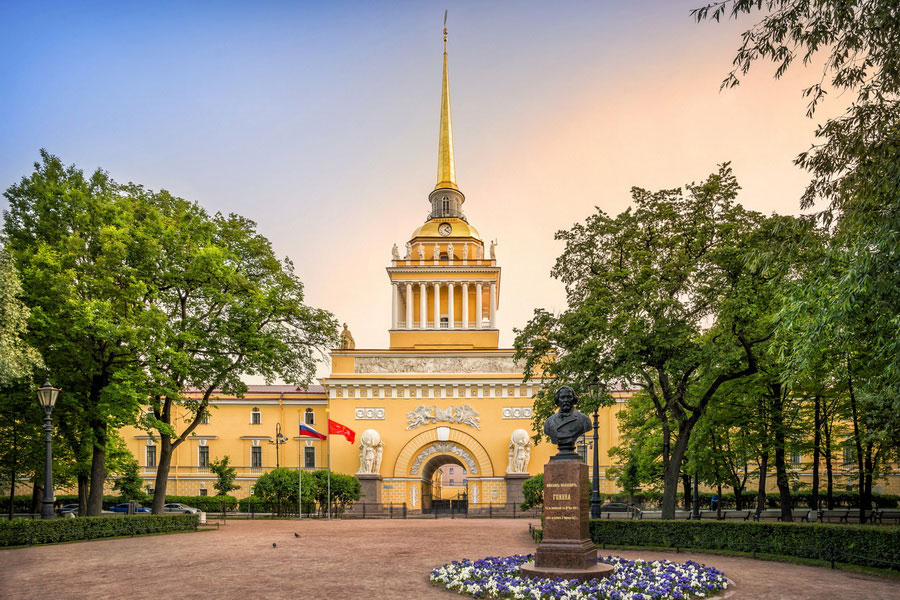 The first Admiralty was located in a U-shaped one-storey building. Years later, in the 1730s the building was rebuilt in stone. The center of the yard was occupied by Admiralty Board with the famous tower decorated with columns and carved capitals, but its main feature was a delicate spire topped with a beautiful miniature gilt three-masted frigate.

In the beginning of the 19th century the Admiralty was newly reconstructed under the guidance of the architect A. Zakharov. According to his project the grandiose structure consisting of two U-shaped houses was erected. The length of the main facade reached 407 m, the sides - 163 m; the height of the building with a spire – 72.5 m. The building was decorated with sculptures representing legendary and mythical sea creatures. Thus, the present building of the Admiralty is the third in design. And the golden weathervane in the form of a ship - one of the symbols of St. Petersburg – is of the fourth version, made in 1886. Although the vane weighs 65 kg and is covered with two kilograms of pure gold, it can rotate around its axis, indicating the wind direction. The real ship of the year 1886 is displayed in the Naval Museum. The Admiralty spire is topped with its exact replica.

The sphere supporting the ship is hollow. Inside it there is the box containing the records of all spire and ship repairs, the names of artists participating in the process, several St. Petersburg newspapers of the 19th century, Leningrad-period newspapers and information about the capital repairs which had taken place in 1929, and 1977.

The Admiralty complex also includes Alexandrovsky Garden, opened in 1874. The Admiralty, a monument of early classicism, is one of the most beautiful buildings of St Petersburg.