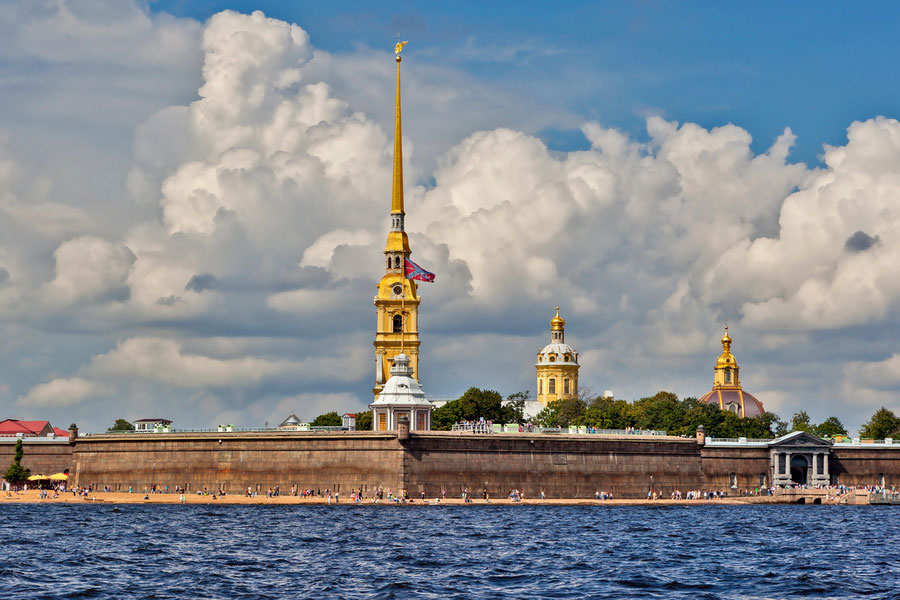 The Peter and Paul Fortress is the historical center, which gave rise to the brilliant city on the Neva River. As we know, all the cities start with a fortress. St. Petersburg is no exception. Its history began with the fortress, which was built by the order of Peter the Great during the Northern War. The fortress was to fulfill a defensive mission, however, it practically did not participate in battles and soon lost its military significance. The Peter and Paul Fortress is located on the Hare (Enisaari) island. Its shape reminds a hexagon stretched from west to east. Six protruding corners are the pentahedral bastions. Initially they were earthy and only in the end of the 18th century they were built in stone. Peter I and his court personally supervised the construction of the bastions, which later were named after them – the Sovereign’s, Naryshkin’s, Trubetskoy’s, Zotov’s, Golovkin’s, Menshikov’s. The bastions were linked by straight solid walls - curtains.

The bastion of Menshikov is adjacent to Peter’s curtain with Peter’s Gate - the central gate of the fortress. The gate is decorated with a full-length statue of St. Peter a wooden bas-relief. The Sovereign’s and Naryshkin’s bastions are linked with Neva curtain with the Neva Gate. The Neva Gate used to be called the «gate of death», because, the condemned convicts were led out through them from to the execution site. Between Naryshkin’s and Trubetskoy’s bastions there is Ekaterininskaya curtain with former prison cells. Naryshkin’s bastion is known for the canon that shoots exactly at noon. The famous Peter and Paul Cathedral is located on the fortress’ territory.

Ceasing to be a fort in the middle of the 18th century the fortress was turned into a tight security prison nicknamed the Russian Bastille. The place of detention was the Trubetskoy’s bastion. Its walls witnessed the rebel son of Peter I, Alexei, the Decembrists, the writers Gorky and Chernyshevsky. From there in 1887 the elder brother of Lenin, Alexander Ul'yanov was sent to Schlisselburg for execution. The thickness of the exterior walls of Trubetskoy’s bastion is more than six meters. The exhibition in Trubetskoy’s bastion introduces the history and life of prisoners held in the Peter and Paul Fortress.Today all buildings of the Peter and Paul Fortress are a part of the St. Petersburg History Museum.