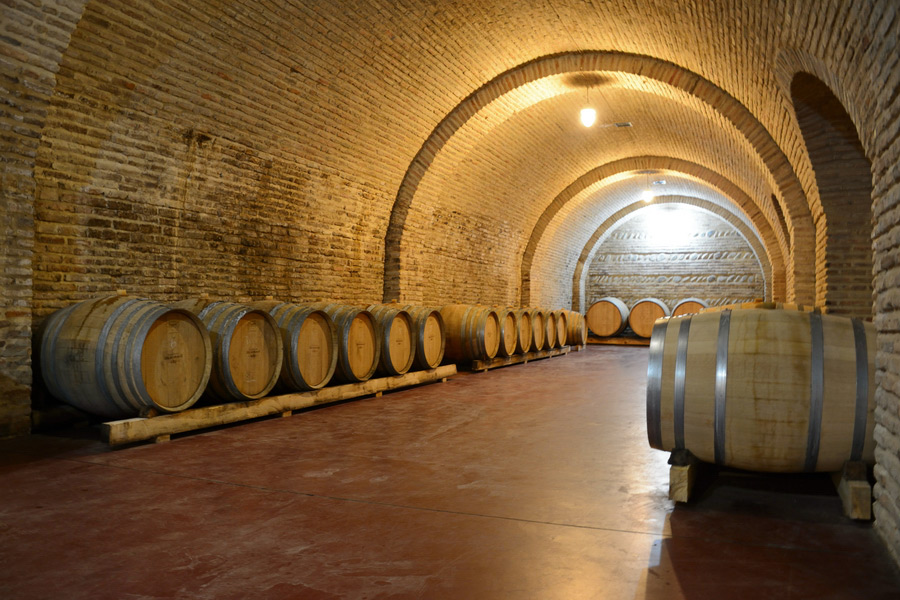 Chateau Mukhrani, one of the oldest wineries in Georgia, preserves the winemaking traditions started by Prince Ivane Mukhranbatoni, a prominent 19th-century descendent of the famous Bagrationi Dynasty. The prince received inspiration for the winery while studying in France in 1876 and founded the estate shortly after returning to his homeland. Today Chateau Mukhrani is distinguished for its castle, vineyards, restored wine cellars and a 19th-century restaurant.

The royal Bagrationi family came into possession of Mukhrani Estate in the 16th century, yet it was not until 1873 that Prince Ivane Mukhranbatoni began construction of its palace, which was finished 12 years later.

The castle was initially designed by French architects. The first floor had an amphitheater that could accommodate more than 150 people, while the upper floors had numerous lounges. The palace garden, planned by a Versailles landscaper, never failed to evoke the admiration of visitors. Ivane Mukhranbatoni hosted many notable Georgian authors in his home, including Ilia Chavchavadze and Akaki Tsereteli, and the Georgian elite regarded the vast estate as a cultural hub.

With the death of Ivane Mukhranbatoni in 1895, life at the palace started to decline, and in 1897 Ivane’s son Constantine Mukhranbatoni sold the estate. The chateau was purchased by the state treasury for 780,000 Georgian maneti, now an obsolete currency, and the grounds proceeded to pass from one agency to the next. The palace was burglarized several times, and as a result much of its unique furniture has been lost. The palace finally came to ruin after the National Guard Headquarters, under the command of Tengiz Kitovani ,was stationed here in the early 1990s.

The Chateau Mukhrani Restoration Project was established in early 2000 with the aim of returning the estate to its former glory. The project’s aims were successful, and today Chateau Mukhrani, a complex which consists of the main chateau, a restaurant, wine cellars, an old production plant and the surrounding gardens, produces delicious wines and welcomes visitors from around the world.

The wine cellars at Chateau Mukhrani connect the palace with the winery and are one of the estate’s main attractions. The vaults, which have a capacity to hold more than 60,000 barrels, are able to maintain a steady temperature throughout the year. Their original appearance has been completely restored, allowing visitors to step back in time to experience the cellars as they would have appeared in the 19th century. 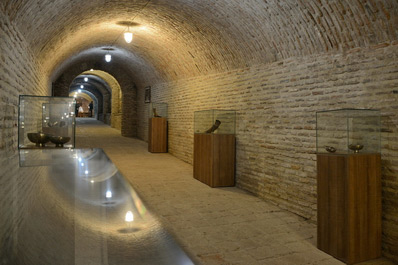 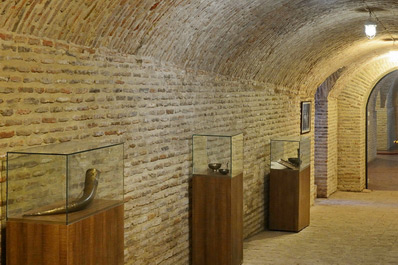 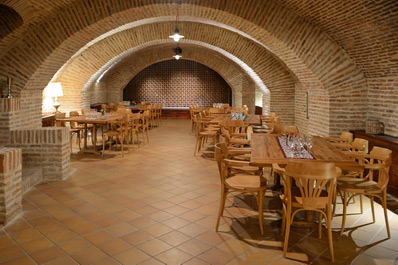 Royal Cellar Restaurant at Chateau Mukhrani first opened its doors in 1878, the same year in which Ivane Mukhranbatoni produced the first bottle of Mukhrani wine, and today the restaurant’s charming interior still appears frozen in that time period. The restaurant provides outstanding service as well as a menu that includes both Georgian and European meals. The royal dishes that Ivane Mukhranbatoni boasted about have been reproduced at Chateau Mukhrani, and with each meal comes a wine recommendation from the staff.

A wide range of wines are produced at Chateau Mukhrani, whose microclimate allows for grapes to be grown in an optimal and natural manner. Some of the most popular varieties include:

Goruli Mtsvane, a dry white wine made from a Mukhrani white grape variety with distinct characteristics. The aromas of yellow plum and melon mingle with citrus undertones in Goruli Mtsvane, which starts out green but fades to a light straw color.

Reserve Royale Saperavi, another exquisite wine which is produced from the Saperavi grape variety of Mukhrani. It has a dark purple color that sometimes turns to dark blue and bears the aroma of mulberry, blackberry and cherry. Reserve Royale Saperavi has about 15 years of aging potential and pairs well with red meat and various cheeses.

Muscat, a rich and aromatic dessert wine with a dark amber color. This delicious wine is characterized by the aroma of figs, prunes and chocolate and is best enjoyed with assorted fruits. Chateau Mukhrani Muscat Bianco is an Italian variety with an unforgettable taste.

Visit this winery on the following tour: