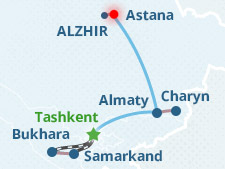 On the Uzbekistan-Kazakhstan 11-Day Tour, you’ll wind your way through Central Asia’s most popular destination as you explore Uzbekistan’s famed cities of Samarkand, Bukhara and Tashkent, each filled with lore and living history. Continue on to the region’s largest nation to visit Kazakhstan’s former and current capital, hike the stunning Charyn Canyon and learn from the past at a reconstructed concentration camp. Guided tours are provided in each city.

Expand All   Collapse All
Day 1: Tashkent – arrival
Arrive in Tashkent. You will be met by Advantour driver and transferred to the hotel. Check in to the hotel at noon. Meet your guide to start sightseeing in the capital of Uzbekistan, the biggest city in Central Asia. Visit Old City part of Tashkent with Khast-Imam Complex where the world famous Quran of Caliph Uthman – Ottoman has been preserved. In Khast-Imam visit Barak-Khan Madrasah, Tillya Sheykh Mosque, Saint Abu Bakr Kaffal Shashi Mausoleum and the Islamic Institute of Imam al-Bukhari. Explore Chorsu Bazaar. Then take a ride on Tashkent Metro to city center to visit Applied Arts Museum and walk through Navoi Theater to Amir Timur Square where you will end Tashkent city tour. Overnight at the hotel.
Duration of sightseeing tour: 5-6 hours
Day 2: Tashkent – Bukhara
Transfer to the railway station at 06:30 in the morning. The high-speed train, Afrosiyob 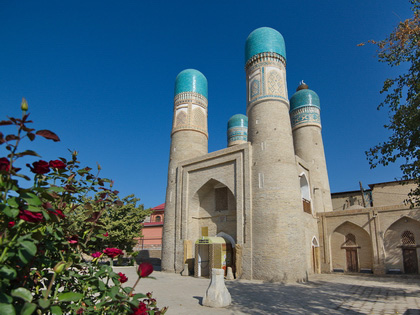